Anne's writing and poetry are widely published internationally and rank in The Irish Times newspaper's Most-Read. She has won poetry awards in Ireland, the USA, the UK, Canada, Hong Kong and Australia, most recently American Writers Review 2021  and the Henry Lawson Prize 2022  - see Awards.  After a long absence, while pursuing a business media career, Anne 'came home to poetry' while grappling with her grief after her mother's death - her first poem as an adult was published in The Irish Times in 2016. This poem, In memoriam II: The Draper,  was the fifth most-read item - across all categories - in The Irish Times on the day of publication and resulted in a furore of social media commentary.

Her poetry appears in newspapers, magazines, journals, anthologies, videos, music albums, podcasts, broadcasts, archives and art exhibitions. Anne's Henry Lawzon prize-winning poem, 'Whisperings' was set to music by internationally renowned composer, David Yardly, recorded with the Sydney Chamber Choir and released on The Lost Codex of Avalon  music album in December 2021. As part of a collaboration with chart-topping Australian hip hop artist, Tuka, two of Anne's poems feature on his 2020 album, 'Nothing In Common But You'.  Through a collaboration with Australian artist, Jane Theau, a selection of Anne's poetry featured as visual art and voiceovers at the 'Stitched Up' exhibition at Newcastle Gaol in July-August 2017. Anne's writing was selected to be performed on stage in Sydney and in film by professional actors as part of the The Monologue Adventure  and Voices of Woman  in 2018, 2019, 2020 and 2021.

A reading by Anne of her diaspora poem 'I will arise and go'  was featured as part of a special message by Consul General Rosie Keane and Prime Minister of Ireland, An Taoiseach, Micheál Martin - to commemorate Ireland's 100 years of freedom as a democratic State and expressing solidarity with the people of Ukraine - on St Patrick's Day 2022. This video  was released by the Consulate General of Ireland, New South Wales on 17 March 2022,

Anne's poem, 'Recipe for a Giant Pickle' was selected to be performed by the Climate Guardians at the inaugural Biennale of Australian Art  (BOAA) - the largest ever showcase of living Australian artists - in Ballarat, Victoria, Australia in October 2018. Her poem, 'scion' was selected for inclusion in the Spirit of Nature  poetry and art exhibition at Manly Art Gallery, Sydney in November 2018. A recording of Anne's poem 'Between ebb and flow' was selected for inclusion in  The Poetry Jukebox  during February and March 2019. ' What Lies Beneath - a lament for the Great Barrier Reef',  written by Anne Casey by special invitation, was performed by international environment activists, The Climate Guardians at the opening of leading contemporary Australian artist, Janet Laurence's 'After Nature' exhibition at iconic Museum of Contemporary Art in Sydney, Australia in February 2019.

Anne is author of Portrait of a Woman Walking Home  (Recent Work Press 2021) - which was shortlisted for the International Rubery Book Award 2022  and the Society of Women Writers NSW Book Awards 2022,  and selected for Best Poetry Books of 2021  (Aniko magazine, Australia); the light we cannot see  (Salmon Poetry 2021) which was shortlisted for the Society of Women Writers NSW Book Awards 2022;  out of emptied cups  (Salmon Poetry 2019) - which was selected for Wardrobe Best Dressed 2020  (Sundress Academy for the Arts, USA) and Books of the Year 2019  (The Lonely Crowd, UK); and  where the lost things go  (Salmon Poetry 2017, 2nd ed 2018). Anne's fifth poetry collection, Some Days The Bird  (Beltway Editions 2022) is co-written with US poet, Heather Bourbeau.

​Anne is included in the following archives:

Anne's article "Returning from Australia, I barely recognise my hometown", which included two poems, was the Number 1 most-read piece overall in leading Irish national daily newspaper, The Irish Times, over the weekend it was published in August 2017 and featured in the newspaper's Most-Read for 2017. The article tackled family issues related to emigration and resulted in widespread commentary on social media. Anne's feature article, including one poem, entitled 'Home is where the heart is' was published in print in the Christmas Edition of The Irish Times Magazine  on 21 December 2019, also appearing online in The Irish Times  newspaper under the title 'The last Christmas I spent in Ireland was 12 years ago'.  This article featured in the Top 10 Most Read items in the newspaper, also reaching No 1 over the weekend of its first publication.

Anne's article "The Lock Up",  which included one poem, was the most-read feature article and the third most-read piece overall in The Irish Times newspaper over the weekend of its publication in May 2017, and featured in the newspaper's Most-Read for 2017. The story unearthed a shameful history of abuse, rape and neglect suffered by marginalised children in 19th century Australia. Anne was subsequently interviewed by Roisin Ingle on The Women's Podcast  for The Irish Times. Other articles of Anne's featuring in The Irish Times Most-Read include: "Marked women, unmarked graves and my typical Irish childhood", published in May 2018 and "'In Australia I’m regarded as Irish, but in Ireland I’m not from here’" published on 6 July 2019.

Anne has collaborations with artists and composers in Australia, Ireland, France and the United States. She has written lyrics for 50+ songs, which feature in concerts and live performances, music albums, videos and on radio. Anne has professional collaborations with internationally renowned composer, David Yardley; US musician, Rex Haberman and his band, War Poets.; Australian chamber musician and composer, John Lewis; Irish singer-songerwriter, Claire Watts; Irish actor and performance artist, Davóg Rynne; and Australian visual artist, Jane Theau. Via a global licensing agreement with CCLI, Anne's co-written songs with John Lewis are currently in use in countries including the US, UK, Ireland, Germany, Switzerland, Singapore, Australia, New Zealand and South Africa, and have received extensive radio airplay.

out of emptied cups 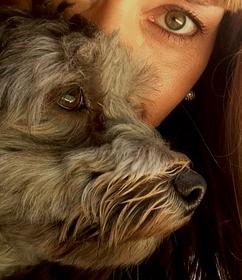 Anne holds a Law degree from University College Dublin and qualifications in Media/Communications from Technological University Dublin. She is a PhD candidate at the University of Technology Sydney supported by an Australian Government Research Training Program Scholarship and a Research Excellence bursary, examining 'The Second-Wave Impact in Australia of the Great Irish Famine'. Anne is a member of New South Wales Writers’ Centre, Australian Poetry and Australian performing rights organisation, APRA AMCOS.

All of Anne’s written works are subject to copyright. She has global royalty agreements in place with APRA AMCOS and CCLI.

For further details on her professional experience, please visit Anne’s LinkedIn page. For a list of her business and legal publications, please see: Business Publications.