PORTRAIT OF A WOMAN WALKING HOME

'Portrait of a Woman Walking Home' can be purchased direct from the publisher: Recent Work Press, and via major online book retailers and bookshops.

In this lyrical, often wry, sometimes heartbreaking and just occasionally horrifying selection of poems, internationally award-winning poet, Anne Casey invites you to step into her shoes, take a self-guided cruise through the 'State of Womanhood' with its redacted facts and multiple travel warnings, feel 'the red hot sting' of betrayal, and leave behind 'nights of secrets and dread' to 'rise with the rage that her fine sisters gave', a 'scattering of blue skies and a pocketful of hope on the long walk home'.

​​RESPONSES TO THIS BOOK:

"Magnificent! I am blown away by the choice of subjects, the way in which every thought is carefully chosen in each and every line of poetry. Every living, breathing woman will find a piece of themselves in Anne Casey’s poetry.”

”Portrait of a Woman Walking Home is an extended contemplation of life in the body of a woman. Casey’s intricate, loaded poems celebrate some aspects of this life – and perform a forensic appraisal of the rest. The voice is sometimes wry, sometimes angry, sometimes elegiac, and always deeply engaged with the language-work and heart-work central to the poet’s vocation. Casey also explores connections between women – mothers, daughters, intuited ghosts, known and documented victims. An unflinching and hard-won book.”

"Now, more than ever, we need this exquisite pocket book of poetry, to carry around with us, in our handbags and in our hearts. A hymn to beauty, to the inner life of women and to the strangely redemptive act of arranging words on the page in such a way that the idea of faith is no longer an idea – a mere noun – but a living and felt presence.”

You, alone, are a woman walking home late, a woman in your inescapable body, hyper-conscious of your clothes, your gait, every bit of space waiting for you to move through it. And the question, ‘why do I have to watch myself’, is question as frustrated demand, as entreaty, as having had a gutful.

But the answer to the question is that women know to watch themselves precisely because they can see themselves through others’ – men’s – eyes and it is this vision that guides these poems. They leap into you and envelop you from within, cinematically forcing you to watch and listen, to freeze, to run, to fight alongside each protagonist. Also though, to love, to remember, to forgive because we all have our own eyes to see and Casey’s powerful words speak to and for all of us: We have the ability to really look at ourselves from multiple points of view and though what we catch sight of is not always pleasant it enables us to understand what we need to understand.

It might be paradox. Someone might be our downfall. We might all be our own downfall? We are at odds with the whole universe, with ourselves, and we are not…

​“In Portrait Of A Woman Walking Home Anne Casey powerfully articulates a poetic politics of female autonomy. Her poems artfully probe the historical, social and political construction of ‘womanhood’ as it intersects with the ‘complicated’ subterranean territory of female self-image, rousing us to join in her bold creative expression of female agency: ‘I am the cry and the call of the brave. I rise, I rise, I rise’.”

“In these unsettling, uncompromising poems. Anne Casey goes dark and deep in her (self) portrait of a woman walking home. The woman is young, in her prime, and older looking back at the painful border crossings of her life. She is Casey and Everywoman and she has a wicked wit.
Casey carves through the skin of experience to show the insides, to expose buried horrors. This is a deeply political book, a feminist anthem, but not exclusionary. In “Welcome to your Life Cruises self-guided tour [Official transcript]” you will read the most fall off the chair, go into convulsions, hilarious yet deadly, examination of a woman’s life voyage ever written.
But this is not just a collection of brilliant individual poems. There is something rotten and drop-dead beautiful in this oh so complicated life of a woman. Casey’s walk home will be read and re-read to understand the state of woman in our time, from where she set off, and where she is going. Join her on the cruise. Walk with her. Look and listen with eyes and ears open to every step, every memory.”

Portrait of a Woman Walking Home 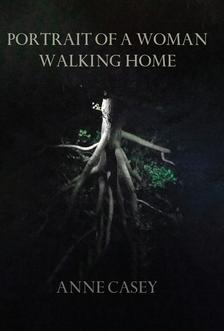